Work visit of the Delegation from Lobachevsky University at the University of Bari “Aldo Moro”, 17 September 2018, Bari

Work visit of the Delegation from Lobachevsky University at the University of Bari “Aldo Moro”, 17 September 2018, Bari

On 17th September, 2018, a Delegation from the National Research Lobachevsky State University of Nizhny Novgorod (Russian Federation), represented by Prof. Viktor Kazantcev, Vice Rector for Research of Lobachevsky University and Dr. Irina Leonova, Director of the International Affairs Department, has visited the University of Bari Aldo Moro and met the Rector and some professors of the University.

EPTRI project has the scope to create the framework for a new Research Infrastructure (RI) intended to enhance technology-driven paediatric research in drug discovery and early development phases to be translated into clinical research and paediatric use of medicines.

In the framework of this project, the University of Bari will contribute in the setup of local units supporting research infrastructure at local level that will be realized in collaboration with CVBF and the University Hospital Policlinico of Bari.

During the meeting, an Agreement for Academic Collaboration has been signed by the two Universities, that foresees an academic and administrative collaboration among the parties, exchange of information and joint publication activity as well as the organisations of joint conferences, seminars and academic meetings.

Moreover, the visit kept on with the meeting with Prof. Francesco Fiorentino, Director of the Department of Literature, Languages, Arts, Italianistics and Comparative Cultures and Prof. Maria Svelto and Prof. Graziano Pesole, of the Department of Bioscience, Biotechnology and Pharmacological Science. In particular, Prof Maria Svelto has accompanied the delegation to visit the Laboratories of the Faculty of Biotechnologies, showing the resources and the facilities available at the Department.

Overall, the work visit has represented the occasion to approach two apparently distant Academic realities and lay the foundations for a future collaboration and cooperation. 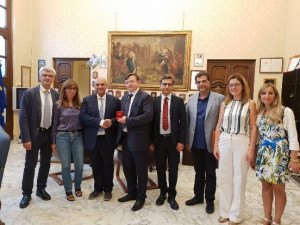 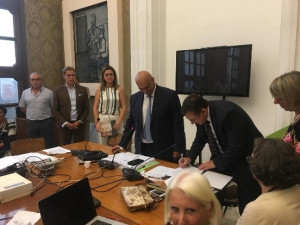 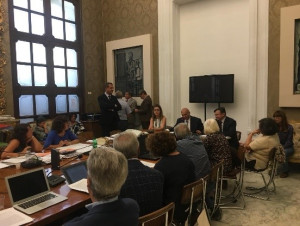